Stop the World. My Husband has a cold. 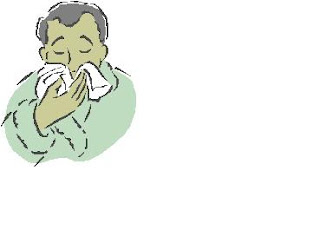 At least that's what he thinks is going to happen.

Every time the hub gets a sniffle, it's the same thing. He's the only one who ever had whatever it is he has or thinks he has, he's never going to fee well again and the world is going to stop turning. (Which would be very bad because we'd lose gravity and all fly up into the air at the same time).

The martyr in him also suddenly comes out.

Him (Hand on head, coughing for effect)- Don't worry about me. I'll just get some soup.
Me - Fine ( know where this is going, but I'll play along)
Him - (Taking one small step toward the stove) By the way where is the soup?
Me- In the pantry.
Him- (Now standing motionless and looking left and right) And where is the pantry?

Does it sound familiar to anyone?

Next he plants his germ infested body in the living room and struggles with the remote, because even if men are taking their last breath, they must be watching TV while doing it. Picture of charm, he is in his pj bottoms with a box of tissues on his chest and a garbage pail next to his chair so he can dispose of anything he feels will not advance him to a total miracle cure. He is now reclining, motionless, eyes closed. But even as I try to take the remote and change the channel, he says "I was watching that." Okay, I understand now. He has x-ray vision and can see right through his eyelids.

After a few hours of noises coming from him that belong in a Stephen King movie trailer, I ask him if he wants to a few more cold tablets to help him feel better. It goes something like this.


Me - Honey, maybe it's time to take a few more cold pills.
Him - I didn't take anything yet.
Me - but you came home from work 6 hours ago.
Him - I was afraid it would put me to sleep.

PUT HIM TO SLEEP!!!! Wasn't that what we're supposed to do when we get sick? Hydrate, rest and sleep??

Deep breath. It could be worse. A cold is only going to last three days.

I'll be at the Holiday Inn until then.
Posted by Kathye Quick at 2:49 PM 3 comments: 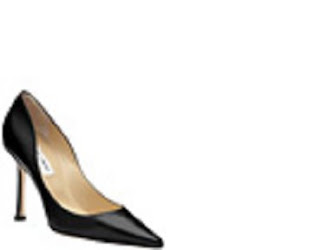 So I have this Bucket List. I think a lot of people my age do. I’m preparing to turn another decade so I made it about two months ago. I admit I cheated and put on some stuff I already did just so I could cross things off. Like going to Iceland, getting elected to public office and writing a book.

There are things on there I may never do like skydiving (too scared), mountain climbing (too old) and losing 100 pounds (too lazy). But there is also stuff that I might get around to doing like visiting Greece, getting a facelift and holding my grandchild.

But I’m getting off track.

So on my Bucket List is “buy a pair of Jimmy Choo’s.” I’m sure you all know what Jimmy Choo’s are, but if, like me, sometimes you hit the delete button in your mind for useless facts, Jimmy Choo’s are exclusive and expensive shoes that are instantly recognizable. The leather is rich and the heels are high, but Jimmy Choo is synonymous with the 'red carpet' shoe of choice and I had to have a pair. Only so I could cross out an entry on my Bucket List.

Who am I kidding? I just wanted them.

Finally I get a pair and I stuff my size 9’s into them and get in the car. Never mind that I can hardly push the gas pedal or the brake because the heel is so damn high. Never mind that at my age, my legs are not designed walk or balance on a spike the circumference of a pencil point. Never mind that I should be 30 years younger to be allowed to purchase a pair of these things. But no matter, I’m doing this.

I make it out of my car in the parking deck, over to the elevator, down to the first floor, across the lobby, up to the third floor and get to the door to my office suite. All I have to do now is get to my office and plop my butt in my chair and I’m home free. So what do I do? I lean forward and miss the door handle. My center of gravity shifts because I’m expecting to grab onto something solid and I fall flat on my ass, coffee flying over my shoulder, purse going one way, briefcase the other in front of everyone who works on my floor because they all happened to arrive at work at the same time for some reason.

And you know what, not one of them believes me when I tell them how it happened. They think it’s all because I fell off my Jimmy Choo’s.

I had to take the day off, fill out an incident report, go to the doctor, get x-rays and spend the rest of the day putting ice on every body part below my neck.

So now I have another entry on my Bucket List. Actually WEAR Jimmy Choo’s and not kill myself in them.
Posted by Kathye Quick at 2:21 PM 3 comments:

I got a phone call today that really made me smile. It was from an old friend; one I hadn't heard from or thought much about for a while. Just checking in and wondering how I've been.

This friend was very important to me in the past. He, and yes, it was a he, was attentive, thoughtful, interested, and, unfortunately married. But so was I, so we joked that we had something in common.

We worked in the same building but not at the same job, When we saw each other, we chatted and flirted and sometimes had coffee. He listened to all the things my husband didn't, noticed everything new and actually seemed interested in what I had to say.

And all these things I did for him.

Then we'd go back to work and home and do it all over again the next day for five days a week.

There were some very sweet, and and very tempting things he did. After listening, and actually hearing, how much I loved the Arthurian Era, for my birthday, he doctored a picture of himself adding a suit of armor and gave it to me in a card. That same Christmas he gave me a set of Christmas ornaments that had a king, a queen, a knight and a dragon. Who wouldn't think twice about exploring possibilities after that?

But it never went any further than a deep friendship.

Looking back now, I know for a fact that although he was handsome and charming and attentive, for me the fantasy was what I really only wanted. Reality would have meant heartache, lies, deception and mega problems.

So, like Jimmy Carter, I lusted only in my heart and eventually, I left the job and we lost the closeness.

Now some people would still not approve, and some people might say I may have still crossxed the line. But after that, believe it or not, because of this friendship, I began to love who I had at home even more. I can't explain why; I just did.

I have no desire to see my old friend any longer. It was nice that he called; he was in the area. But hearing his voice made me realize that just like Dorothy, when looking for my heart's desire, I needed only look right at home.
Posted by Kathye Quick at 4:33 PM 2 comments:

We must all evolve or be left behind